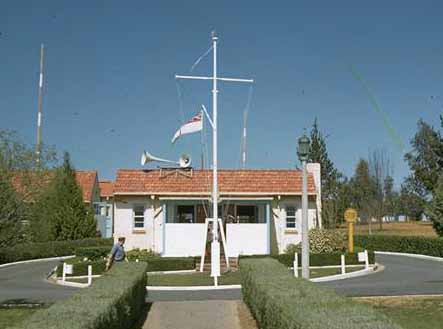 For those who have requested transport for Tour Group A, a bus will depart the NCC for Harman on the hour on Tuesday from 0900 to 1200. Return trips will depart Harman for the NCC on the half-hour from 0930.

For those who have requested transport for Tour Group B, a bus will depart the NCC for Harman on the hour on Tuesday from 1300 to 1500. Return trips will depart Harman for the NCC on the half-hour from 1330. The last trip will depart at 1630.

For those who have requested transport for Tour Group C, a bus will depart the NCC for Harman on the hour on Wednesday from 0900 to 1200. Return trips will depart Harman for the NCC (or the Yacht Club barbecue) on the half-hour from 0930.

Those using their own transport should time their arrival and departure as desired within the period allocated to their Tour Group.

The gangway is no longer where many of you may remember it. As you cross Canberra Avenue and approach Harman, turn left and travel about 300 metres. You will see the gangway on your right.

The security staff on the gangway will direct you to a parking area on the football oval.

This event provides the opportunity to take a nostalgic look at what may have been either or both your home or workplace at some time in the past. There would be few communicators who have not served at Harman.

For some of you it will be many years since you were last at Harman and most of the buildings familiar to you will no longer exist. For others, many of the buildings will be familiar. Regardless of which group you belong to this tour is bound to evoke memories.

One building that remains is what was originally known as No 1 Receiving Station and later Canberra Tape Relay Centre (CTRC). It is now known as Naval Communications Station (NAVCOMMSTA) Canberra ­ and it is included in the tour.

NAVCOMMSTA Canberra is an important operational facility. We have been given dispensation for you to tour, but it comes with conditions. The conditions are that touring groups consist of no more than 30 people, and that each group be escorted at all times.

With only one and a half days to get more than 500 people through under these conditions it is necessary to impose some controls. As a consequence you may find yourself having to queue to tour the NAVCOMMSTA. You may be able to limit the wait by avoiding the peak periods, which are expected to be mid morning and mid afternoon.

Provided you are wearing your nametag, you will be able to visit other parts of Harman at your leisure. Coffee and Tea will be available at the Senior Sailors Mess throughout both days, and the bars in both the Senior Sailors and Junior Sailors messes will be open from 1100 to 1600 on Tuesday only. Both messes extend a welcome to all reunion attendees.

Remember, the last bus will depart Harman at 1630 on Tuesday. If you miss this you will need to make your own arrangements for travel back to the Civic Centre.

Please wear your reunion nametag at all times while at HMAS HARMAN.